Ahead of the Curve in the City of London

Ahead of the Curve in the City of London.

The City of London has interesting nicknames for some of its more famous modern buildings. For example, the ‘Gherkin’, ‘Cheese Grater’, ‘Helter-Skelter’ and ‘Walkie-Talkie’ buildings, to name but a few. The latest to grace the iconic London skyline is 70 St. Mary Axe, or the ‘Can of Ham’ as it is affectionately known to its friends.!

As the building neared completion, removal of the final core-mounted luffing tower crane from the roof of the 100m high building became the focus of attention. As the structure’s 50m x 50m footprint takes up an entire City block and with curved walls tapering outwards into the surrounding streets, positioning a suitable capacity mobile crane to undertake the work became a significant challenge.

Techlift were contracted to carry out an independent review of the proposals for the assembly and operation of a 1,000te capacity mobile telescopic crane (Demag AC 1000-9) on luffing jib to carry out the removal of the tower crane. Underground tunnels, narrow surrounding streets and road closure restrictions all contributed to the complexity of the project.

The job took place over a 48-hour period with the tower crane and its grillage being successfully removed without incident and ahead of schedule. Techlift provided onsite support during the assembly and lifting operations. 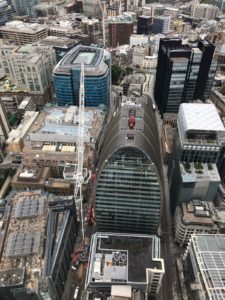 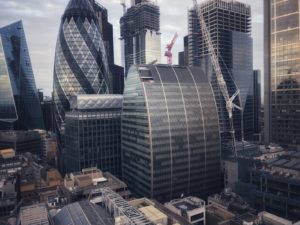